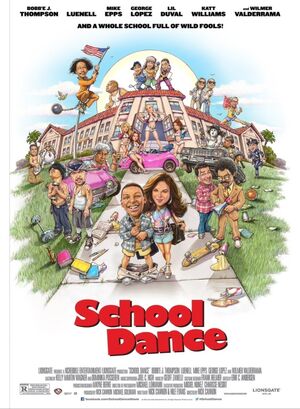 School Dance is a American comedy-drama musical film directed, written, and produced by Nick Cannon. The film was filmed back in Los Angeles in 2013, but was released on July 2, 2014 in select theaters, on VOD and digital download. The film is produced by Cannon's production company, N'Credible Entertainment and is distributed by Lionsgate Entertainment.

A high school freshman, Jason Jackson finds his high school crush, Anastacia, but the problem is she doesn't know he exists. So he decides he wants to be part of the most popular dance clique in his school, "The Rangers", but has to overcome his battle-ax of a mother, survive Anastacia's gangster brother, and pass the crew's intuition of getting a pair of panties from a Sweet Girl by midnight. He really liked her and got forced to get the panties by ‘The Rangers’ just to be in their click.